My Boys Just HAVE to Go and Be Such Boys Don't They!

You know those days where you know you are going to need one mighty big glass of coping cordial at the end of it? Yep I had one of those, courtesy of one little boy.

My husband has been hassling me for ages to shop at Aldi. He does, my parents do, but I prefer the bigger grocery stores, the ones where I know the brands and where I know where everything is including the Dan Murphys or Liquor land that is usually attached.

I gave in yesterday and agreed to try it their way. So whilst the hubby was off mowing my parents lawn, I grabbed every bag I could find, convinced the kids it would be like an adventure and headed off.

As I cruised the first aisle, I started to think to myself that this wasn't too bad after all. It was busy, but there was plenty of stuff to choose from.

The kids wandered off and were checking out the Halloween merchandise so I powered on ahead grateful for the uninterrupted run.

I didn't take too much notice of the first cry. I knew it was one of mine but I figured one of them had just done any number of the million and one tricks they have to annoy each other and so I kept on perusing the yoghurts.

It wasn't until my oldest son came running up to me and announced to everyone in ear shot "Mum Flynn's head is stuck in the freezer"!

"What The"? "How on earth has he got his head stuck in the freezer?" I spluttered in disbelief.

"His tongue is stuck on the ice" informed my suddenly ever so responsible oldest child.

My cheeks started to burn as I could see everyone around me whispering and trying to hide their laughing from me. As I shoved my trolley to the side of the aisle in preparation for my dash to the freezer, I turned and saw one very sad looking 5 year old being brought down my aisle by an older woman and her husband.

The woman was being very caring and talking calmly to a distressed Flynn as she walked him towards me. Her husband was walking behind her laughing - typical boy thinking it is funny!

"What on earth were you doing with your tongue in the freezer?" I asked him in disbelief

"ther boyth thold me to do ith" was his teary reply with his tongue hanging out of his mouth.

I should have known the boys would be behind this.

I spun around to look at his brothers who were suddenly very preoccupied with the calorie content and country of manufacture on the Greek Yoghurts, but before my anger could take hold of me, it hit me..... relief. He was OK.

I looked at his little face and his eyes were going all cross-eyed as he tried to look at his own tongue. I gave him a cuddle and did what any totally insane mum would do in that situation - I whipped my phone out of my bag and took a photo!

The kind lady and the many spectators assured me he would be OK and that tongues just bleed a lot. And the kind lady's husband as well as a few others assured me that was is a perfectly normal boy thing to do.

Exactly how did I become a mum of three boys?

I get myself into enough Awkward social situations WITHOUT the added drama boys bring.

Clearly it is Karma at play. A kind of payback for all the stuff I put my own parents through.

We didn't get to finish the shopping. I grabbed what we had and headed straight to the checkout. Flynn followed behind us with his tongue stuck out of his mouth the whole way. 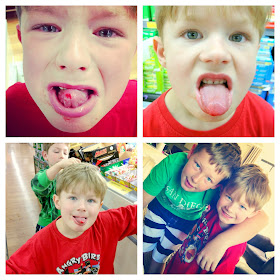 When we got to the counter he held up a pack of mints and asked if he could have them to get rid of the taste of blood in his mouth. Who was I to refuse? The poor kid had just had a major run in with a freezer, so of course I said yes.

What I didn't realise is that he would eat pretty much the whole packet on the drive home and that they have a laxative effect if consumed in excess.

He has had a lot of time to think about the stupidity of his actions today as he spent the afternoon on the loo.

I may have excessively consumed the Coping cordial that afternoon too.


Are boys really that thick?
Do your kids dare each other to do really stupid things?
Do you shop at Aldi? I'm kinda thinking home shopping is the way to go!
Life Love and Hiccups at 07:30
Share
‹
›
Home
View web version