One Of THOSE Awkward Conversations 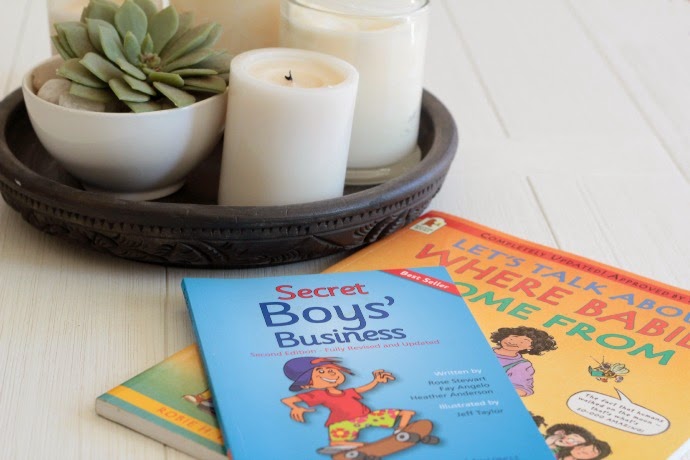 I remember all too clearly the night when one of my boys came downstairs crying because he thought he was growing a baby in his testicle. It is burned on my frontal lobe.

I also have a very clear memory of the questions that were fired at me at nano speed as we drove to school, and how straight after drop off I was forced to go the local book store to buy some of those books about where babies come from and boy stuff.

To top it all off I was the one who had to organise the family meeting to have 'The Talk' and I was also the one who had to do pretty much all of the talking because my husband was sitting there trying to hide his sniggering behind a cushion he was holding to his face.

Yep it was, but I at least had a little warning that day to prepare myself and we got through it with the help of some helpful books, a couple of coping cordials (aka vodka and sodas) and the old one two skip a few technique of working our way through the more embarrassing pages in the book.

Look I'm no prude. I'm totally happy to tell my kids all they need and want to know about sex.. when they are 30.

But I was thrown for a sixer when my oldest son came home from school last week and informed me that they had a sex ed class at school that day.

"Ewww really?" was my somewhat immature response. "And ummm how did that go for you?" I asked him.

"It was OK, a bit embarrassing cause some of the girls were sitting there giggling the whole way through" he told me as he busied himself buttering some toast and not making eye contact.

"Oh really. Wow that's sooooo uncool. What did you learn about?" I asked as I busied myself picking fluff off a cushion and also trying not to make eye contact.

Cue the uncool sniggering and giggling from me because clearly I have not progressed much beyond 12.

"Yeah? Wow. Good stuff. Glad you had a great day at school today mate, I have to go and ummm re grout the toilet... or something like that" I mumbled in what I can only guess was genuine shock as I headed for the safety of the bathroom were I could sit and think and absorb what he had just told me.

It's not that I am embarrassed to talk about those kind of things with my son.... OK yes I am a bit cause well I don't have dangly bits and boners and stuff.

It is more the fact that he is twelve. TWELVE!

Surely he should be learning about colours, shapes and animals and be busy practising his cutting out or something other than talking about boners.

ohhhhh Alright. I know I am trapped in some kind of denial and that there is a part of me that wants to believe that my oldest son's fave show is still Bear in The Big Blue House and that he will want a choo choo train cake for his birthday, but come on... there was no warning people. Nothing!

No crumbled up letter to retrieve from his bag that was informing us our kids would be discussing this stuff. No note to sign to acknowledge that we could very soon be facing some very awkward follow up questions.

Although I am somewhat grateful for the fact that someone other than me has now addressed the topics that were on the pages that I managed to skip without him noticing during 'our talk', I have to admit there is a small part of me that is a little peeved that we were not given any kind of warning that this discussion was going to take place.

The melodramatic drama queen in me feels like she has been denied some kind of parental right by not being told beforehand that my son was going to be talking about this kind of stuff at school in front of his peers. The same drama queen needed a little heads up you know!

Yep I am most definitely going through the denial stage about my kids growing up. It's just that they grow up so quickly and well I don't know, twelve just seems soooo young and I want my kids to be kids to be sweet and innocent and not thinking about sex and stuff for as long as possible... and I am going to go and stick my head back in the sand. It's calmer down there and less awkward.

Do you think we parents should have some kind of say about when our kids get told about this kind of stuff?

Does anyone else feel our kids are growing up too quickly these days?

Am I in complete denial about what our kids already know?

How young is TOO young to talk about sex with our kids?