Crawling Out of My Hole 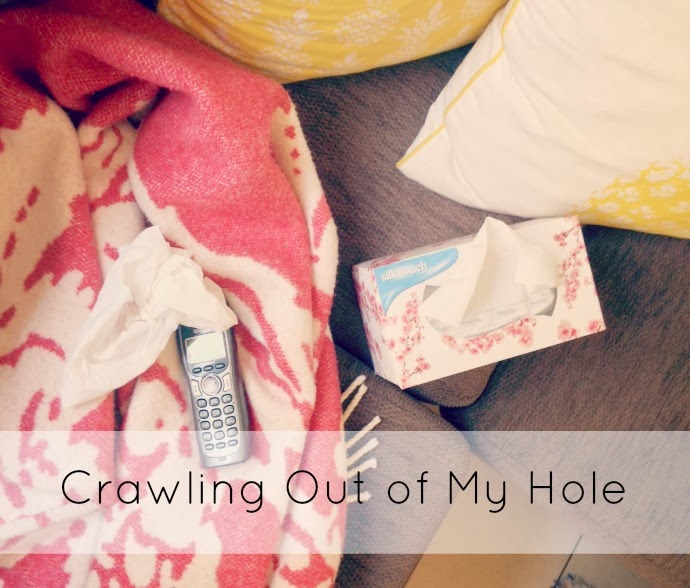 And so she crawls out of the hole under the rock she has been hiding in...

Ok so I haven't EXACTLY been under a rock, actually flitting between my bed and the couch to be precise. Besides I wouldn't of had the energy to lift a rock to crawl under it without dropping it accidentally on purpose onto my head or something equally as gruesome ... and painful.

Beating yourself up is exhausting, mostly useless, completely demoralizing and did I mention exhausting? There is only so long you can curl up in a little ball and lick your wounds before you realise that Man, that really tastes like shit.

And so hello here I am.

A little bruised, somewhat nervous but a bucket load wiser.

As much as I hate to admit it, what happened was sort of a good thing in a way as it made me more conscious of the power that words on the Internet can have. How sometimes words can be interpreted in a way they were so not meant to be and you need to be aware of that. And I learnt that navigating the school yard as a mum sure can be tricky at times, but you just need to be open and honest, listen and speak from the heart and at the end of the day know that we are all just winging it.

Yesterday I had the very humbling experience of picking up the phone and making phone call after phone call to personally apologise to anyone whom I feared had been hurt by the post where I wrote about what happened with one of my kids and his sports team.

No one forced me to do it, but Holy Shitballs that was one of the hardest things I have ever had to do as a grown woman.

Although I knew in my heart that I hadn't done anything malicious or nasty and that all I did was write about something I was going through as a mother, it hurt me to know that I could have caused other mums whose kids were in a team with mine, to lie awake at night worrying if their child had been involved in what happened, was their child having this done to them or were they doing it to someone else?

THAT was the part I regret as a mother, knowing full well that all of us already have an overflowing bucket of worries that keep up awake at night, and to know that I may have added to the bucket.... THAT made me feel like the biggest turd alive.

But as hard as it was making those phone calls, it was an enlightening experience for me as both a school mum, a friend, a writer and an individual. Every call I made I was expecting to get my backside smacked, but surprisingly, nearly every parent I spoke to actually thanked me for writing it and for provoking them to have a discussion with their own children that they may not of had, had they not heard about 'The thing that Sonia woman wrote' or read it for themselves. Yes, some of them understandably felt I could have given a little more thought to how some of the mum's might have been feeling like everyone was looking at each others kids and wondering ... was HE the one that did it and passing judgement? But on the large it was something most of them had worried about themselves with their own children at some point or another.

Obviously that made me cry even more ... but for so many reasons.

I cried for the kindness and understanding these women showed me.

I cried in relief that I wasn't going to be tied to a stake and burnt next time I showed my face at a game.

I cried with remorse for anyone who was hurt but didn't want to hurt me more by telling me so.

And I cried with joy that for some my words did have a positive impact, that those discussions did take place between parent and child and that because of those discussion there will be a whole bunch of kids playing sport together who will be making a conscious effort to positively encourage their team mates or on the flipside, be more forgiving and understanding if someone loses their cool with them in the heat of the moment.

That's why I write the way that I do - straight from the heart, dripping in emotion. That's why I say what I am feeling or thinking - not to cause trouble or make anyone feel bad ... God No! I just want to voice the feelings and thoughts that someone out there may not at that moment have the courage to say outloud for themselves.

And so that brings me to YOU, you gorgeous amazing souls. YOU have no idea how much strength you gave me. How much I truly appreciate every single comment, email, tweet and text message. You reminded me yet again why I am sooooooo damn lucky to be part of something so incredible - YOUR village.

And so that chapter closes and we move on to the next thing to worry about and the next thing for me to stuff up ... like how the hell I am going to cope with learning the ropes as a School Mum all over again when my son starts high school next year.....
Life Love and Hiccups at 15:45
Share
‹
›
Home
View web version